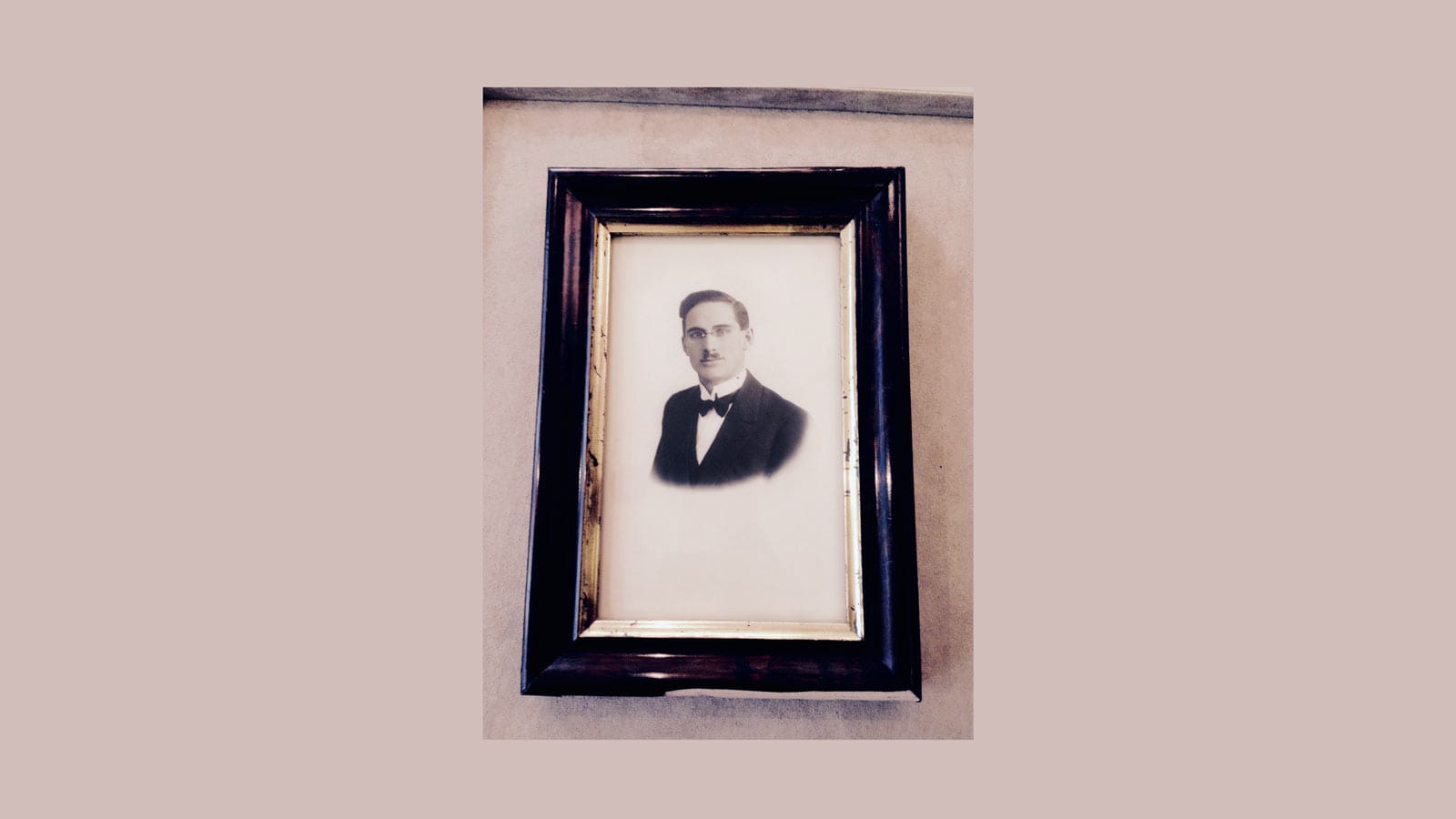 Watchmaking in Vaud was based in Nyon, Rolle, Morges, Lausanne, Vevey and Moudon, where a hundred or so watchmakers made movements destined to be terminated in the metropolis of Geneva. The Vaudois were only able to call themselves watchmakers after 1723, when the Bernese granted a charter to each of the watchmaking towns. This charter regulated the profession very strictly and guaranteed a monopoly to the members of corporation; soon the watchmakers formed a regular aristocracy. The first watchmakers in the Vallée de Joux established themselves at the beginning of the 18th century. These were iron workers – cutlers, armourers etc – the most talented of whom made simple clocks in the style of the Franche-Compté region. The leaders of this movement were the Golay family; in particular, Moïse and Isaac who, in 1737, made the clock in the church at Sentier. Samuel-Olivier Meylan, son of Jean-Baptiste, living at Chez-le-Maître, was the first to manufacture watches in the Vallée de Joux. He was probably the son of a family of blacksmiths.

Becoming a watchmaker in those days was not easy. The charter required the supplicant to start with five years of apprenticeship, followed by three years as a journeyman and, finally, to present a watch made entirely by himself – his master-work – based on which a jury would decide whether to award the warrant of watchmaker which, alone, gave the right to employ an apprentice or journeyman.
Samuel-Olivier left the Vallée de Joux in 1740. He found a position as an apprentice to Mathieu Blaudet, at Rolle, which he left three years later to set up on his own in his village. Without doubt, he felt he had learned enough since, thumbing his nose at the charter, he employed as apprentices the brothers David, in 1743, and Pierre Golay, in 1746.

The lack of a corporation in the Vallée was a major handicap for the prospective watchmaker, in the sense that he would, of necessity, be obliged to go elsewhere for eight years to earn his warrant, and to bear the considerable cost his upkeep during this time. At the request of Samuel-Olivier, in 1749, the obligations of the watchmakers of the Valleé to the corporation were rescinded until such time as they were sufficient in number to form their own corporation in the village of Le Chenit; the number was fixed at seven master craftsmen. One year after the death of Samuel-Olivier, in 1756, a watchmakers charter was granted to Le Chenit by the Bernese government.

The corporations had two responsibilities: on the one hand, to ensure the well-being of the watchmaking industry generally, which they never achieved, and, on the other hand, to protect the interests of the district and themselves (the watchmakers) in particular (Corporation of Rolle, 1723); in this they succeeded admirably since the master craftsmen rapidly became wealthy men. However, the journeymen workers only scratched a bare living from their long hours of labour and drew no benefit from the numerous rules and regulations which served only to stifle progress and the rare attempts to reform the industry. In the face of unrest in Morges, Lausanne, Rolle and the Vallée, the system of warrants was abolished in 1776. By then, there were eight Meylans watchmiaking in the Vallée.

The abolition of the warrant system, by doing away with the obligation on the watchmaker to be able to fabricate complete watches, opened to door to the division of labour, radically changed life in the Vallée. Small companies, initially family based, emerged, specialising in just one aspect of watchmaking. No longer were complete watches manufactured, which made it much easier to gain access to the profession. If the division of labour deskilled watchmaking and made it less interesting to the workers, it did rationalise the industry, increasing output, decreasing costs and ushering in the era of volume production. The Vallée was so effective at this that by the end of the 19th century there were over 50 watchmaking enterprises in the Vallée, of which only a minority produced terminated watches. The difficult years were over and wacthmaking, introduced by Samuel-Olivier, enabled the future district of the Vallée to achieve unforeseen prosperity. 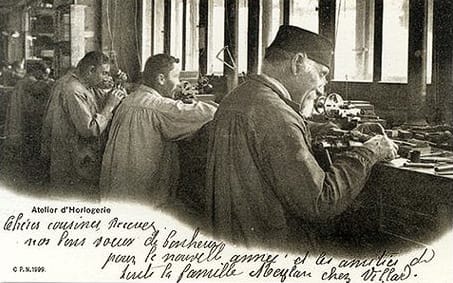 There was no lack of remarkable watchmakers during the two and a half centuries of watchmaking in the Vallée de Joux. They weren’t all Meylans, by far, but Philippe-Samuel Meylan was the most notable of the early 19th century.

His activities covered everything related to precision engineering: his watches were unique of their kind and his automata were as good as anything produced by the great Jaquet Droz. His materpiece comprised a marvellous grotto out of which emerges a monk who strikes the rock and replies in writing to a question, picked from among 28 by the audience and submitted through a drawer. He made white mice which ran, paused, ran again and finished with a jump. He made pistol with a watch in the handgrip; when fired, a whistling bird emerged from the barrel. Practically the entire collection of his works were bought by an Australian; however, the boat carrying them sank and they now lie at the bottom of the Indian Ocean.

He made ultra-thin watches, money-watches and successfully built a watch into an old twenty-franc coin. This feat was made possible by another invention of his, the so-called ‘bagnolet’, a new form of movement which reversed the tradtional layout of the gear-train.

He created a large number of skeleton watches, that is watches with two visible plates beautifully engraved with flowers and inter-woven plants; the movement is also visible and the bearings are hidden at the centre of the flowers or crossings of the stems.

He was the first to build chiming watches using spring chimes rather than bells and he even invented an ‘alarm ring’; this was a ring comprising a minute watch which would prick a steel pin into the finger at the appropriate time.

In 1811, together with Isaac Piguet, he founded Piguet & Meylan in Geneva which was, until 1828 when the two associates separated, one of the largest companies in the city. Before that, in le Brassus, he had worked with another Piguet, Charles-Auguste. He it was who founded Louis Audemars, which enabled him to set up in the Vallée. It was from Louis’s family that emerged Audemars, Piguet & Co, which is now the best known maker of prestigious watches in the world.

In Geneva, Piguet & Meylan specialised in high class musical and novelty watches incorporating tiny automata, decorated in the style typical of Geneva; the two associates were masters of this and produced so-called ‘Chinese’ watches, that is, in the main, models in gold, enamelled and set with pearls, destined for the Chinese market.

His son, François (1800-1882), continued the work of his father, while his second son, Hector, tried his hand at painting. After two generations of change, the family of Philippe-Samuel is still to be found in Geneva: the fourth generation, represented by Yvonne, born in 1913; the fifth, represented by Jacques, born in 1929, gynaecologist like his father René (1902-1968); and the sixth, the three children of Jacques.

If the descendents of Philippe-Samuel have abandoned their ancestor’s profession, there are still to be found in Swiss Romand a few watchmakers called Meylan carrying on the profession and traditions of their ancestors.

News that may interest you

Back to the news